10 Fun foods to try in Japan

Japan has a truly fascinating food culture, one that I could not wait to have a few days to explore. I spent more time researching what I should eat than anything else; thankfully, my husband dealt with the “what to see” while I obsessed over that. Now, if you are looking to try the weirdest or most adventurous foods in Japan, that may be another list. I consider myself not picky at all, but not up for absolutely any food; so no horse meat or whole pickled fish. I did, however, have some “crab butter” which I could tell from the colour and texture was surely crab guts and only just now had the guts myself to google and confirm this.

After my ten days in Japan, travelling through Tokyo, Osaka, and Kyoto on a mission to give my tastebuds a treat, here are the ten things I recommend you just should try if you ever are able to travel this beautiful country.

This cuisine gives you all the fun of having your food cooked in front of you, fresh, but without the work. The name is a combination of the Japanese word okonomi, meaning “what/how you like” and naki which means “grill” and it is essentially a savoury pancake, the filling of which vary. The main ingredients are a meat or seafood protein, eggs and cabbage, but you can also add noodles, green onion and other ingredients if you choose. It is topped with a thick soy/worchestire type sauce, mayonnaise, katsuobushi which is smoked bonito, and finally a dried seafood called aonori. 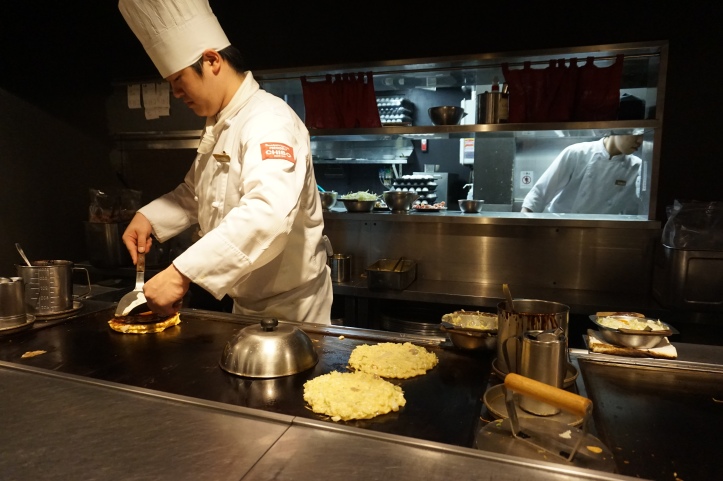 Breakfast, lunch, or dinner, ramen is a food for any time of day; we ate  the deliciously messy bowl above at 5:30am after missing out on getting in to the Tskuiji the fish market. On a chilly morning this hits the spot for sure and we would have had ramen more often I think if there hadn’t been so much else to try! Though it is almost always made with pork broth, you can get a variety of meats, seafood and vegetables in this traditional Japanese noodle soup. On our last day we event stumbled upon “wonton ramen soup” probably not technically ramen, but definately delicious! 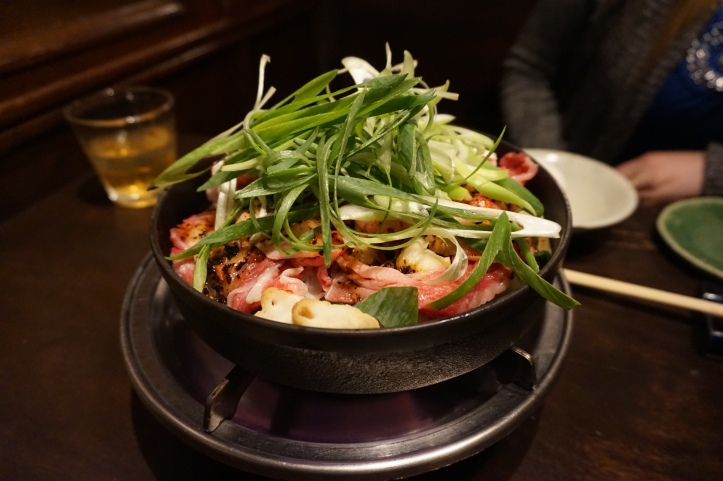 Sukiyaki is cooked in a hot pot, called a nabemono, set to high heat. Thin sliced beef mixed with vegetables and a well seasoned sauce. We ordered one with sweet potato sauce and one that said it was spicy “with a whacked taste” – not sure what word they were trying to use, but I was intrigued, and it was delicious. The restaurant we ate at also had Shabu-Shabu, which is cooked in a hot pot as well, but with a lighter broth or just water, we didn’t try it but will have it on our list for a future trip. The pricepoint for this fondu-style meal is pretty high, so Sukiyaki provides a great option for a similar experience.

Essentially these are pork cutlets;fried in panko crumbs and they are served with finely shredded cabbage. You can also get seafood and chicken. It will be no surprise to my close friends that we had to try all three. I will be forever shameful of my attempt at panko crumbling anything, it was perfect here, a thick coating of perfectly crispy crumbs and with the cabbage, the meal seemed far less heavy. We ordered two “sets” which are combos so it also came with rice and miso soup; it was far more lunch than we probably needed but damn was it good!

Generally, I don’t appreciate meals like fondue at a restaurant, why would I want to cook? I am out at a restaurant specifically to avoid this daily task. But yakiniku I could handle, having a hot grill at the table to cook your meal fresh, at your leisure — and that that meat — oh my! We think Alberta beef is pretty great (and to save losing all my friends, yes I still think so) but never have I had slices of beef that just melted in my mouth and could be pulled apart easily; with chopsticks might I add. I almost wanted to go for yakiniku twice, but instead I will settle for hunting for one in Calgary, because I had other priorities here! 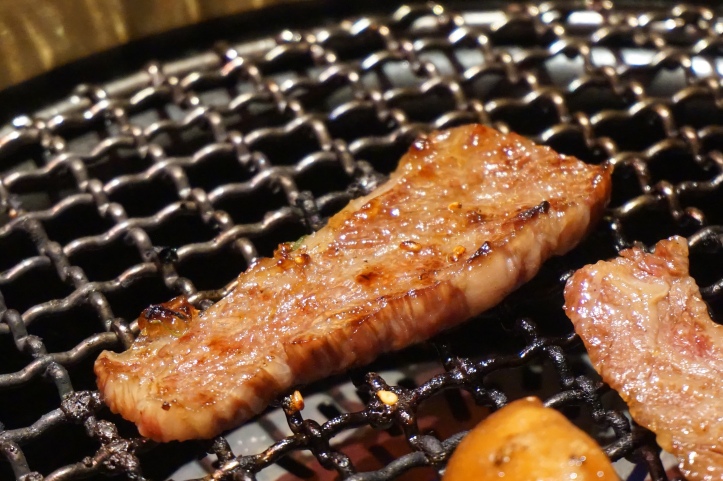 If I pigeonholed all the delicious things I tried from food stalls, this would have to be a much longer post. Throughout all three cities the street food was very similar, though I saw way more Takoyaki (Fried balls of dough filled with octopus) in Osaka by far. Curry buns, steam buns, fried chicken, pickles on a stick, thick bacon on a stick, mochi (pounded and moulded rice, often with a sauce or filling) and more. There was also many waffle type items filled with various custards or bean pastes – taitaki being the fun fish shaped ones below. 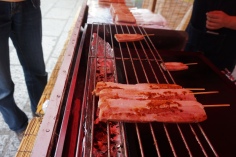 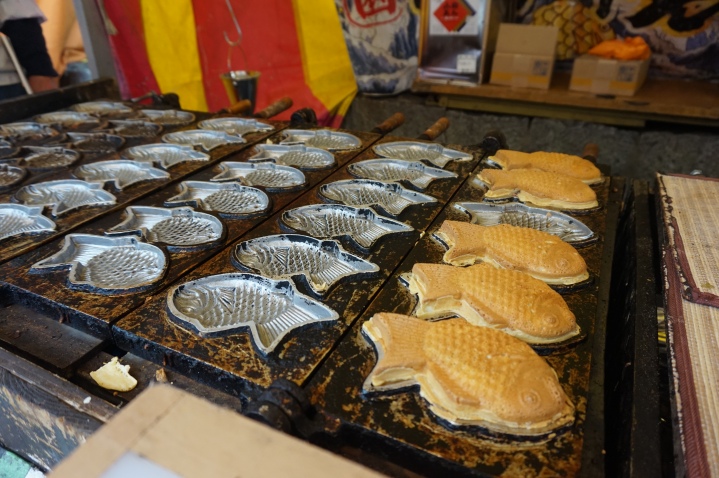 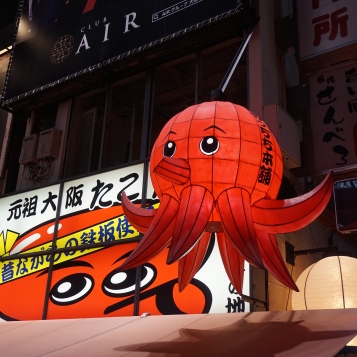 I was surprised by the abundance of pastries in Japan, and then my surprise turned to delight and we proceeded to have them pretty much every morning, trying a different one (ok, two) each time. So much for thinking the light cuisine in Japan would be a nice diet, we tried at least 20…Oops. Kashipan is a sweet bread, they can be filled with with a sweet bean paste called adzuki, custard, melon, and even more savory fillings such as curry and cheeses. In Kyoto there was a shop across the street, so we basically just attempted to eat our way through the menu.

And I don’t have another picture of pastries…I ate them too fast! 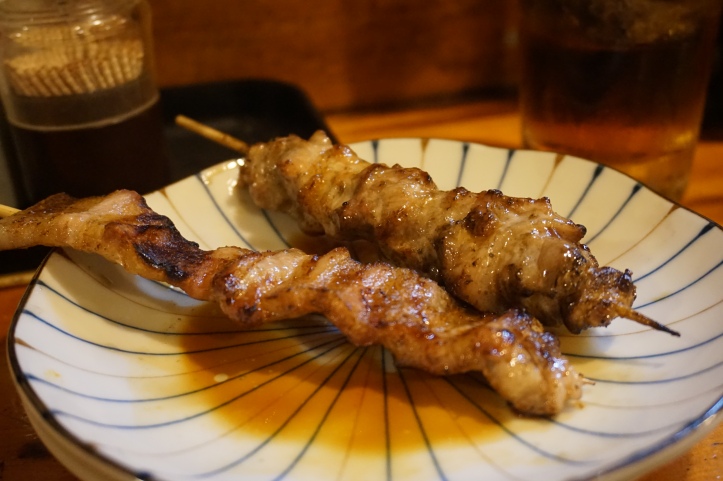 The most famous type of this succulent skewered meat is yakitori, which is chicken, but pretty much anything can be skewered. And I really mean anything; entrails, liver, hearts, you name it! We chose to stick to things we were used to and enjoyed sausage stuffed peppers, bacon wrapped tomatoes, steak, chicken, mushrooms, peppers, and pork belly.  As it is all cooked on a charcoal fire, you get that amazing smoky taste on something that is already seasoned and bursting with flavour. We chose to try this out in Omide Yokocho aka Memory Lane (also aka “Piss Alley”) where over 50 tiny restaurants, mostly capable of serving less than ten customers huddled around a bar, are packed into two short streets. I highly recommend checking it out, a very unique experience and the food was top notch! 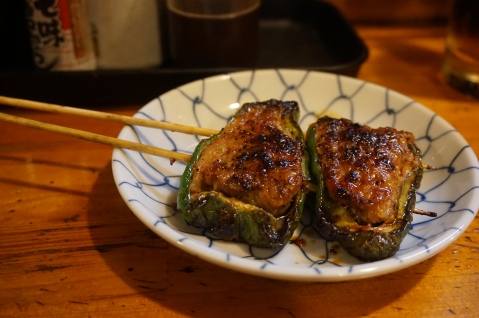 Of course, I didn’t forget sushi, I think everyone goes to Japan expecting to eat sushi, after all it is the best place in the world to do so. The fish is so incredibly fresh and the variety is endless. I will admit this is where I get a bit squeamish, but I tried to be more adventurous than usual with my choices and tried more raw fish than I have before. We went to sushi trains twice, my advice here is to see what is coming out fresh and order it as it is made, otherwise it’s hard to know how long it has been on there. We also went to Genki Sushi in Shibuya for lunch one day which was lots of fun; you ordered on an ipad and the dishes arrived by a little monorail right to your seat! If I am ever back in Japan I will try out some more high class Sushi but these were both just something different and interesting and were great cheap meals to break up the more expensive ones. 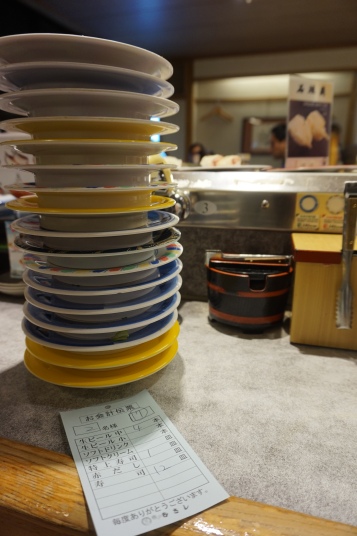 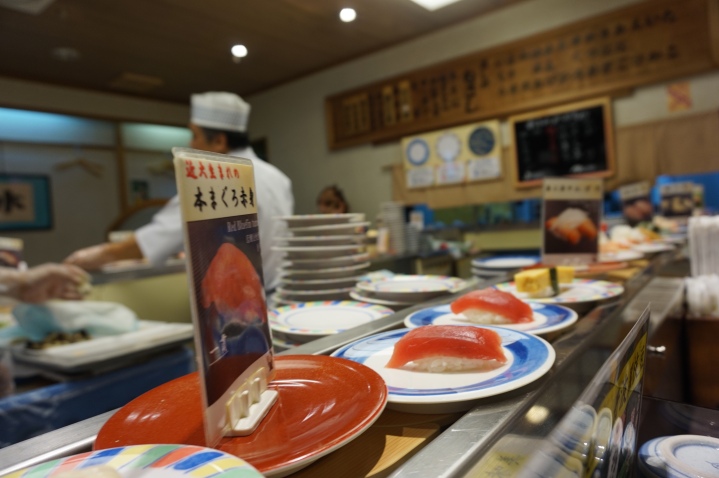 The sundae above was the ultimate matcha overload; matcha jelly, with matcha and vanilla ice cream layered with matcha cake…and topped with matcha whipped cream! Plus, because this has so much matcha, I feel like the antioxidant benefits just zeroed out the calories consumed. Fact. Apart from seeking out something of this decadence, I think everyone who visits Japan should ensure they try a cup of proper matcha tea. Heavier than your average tea with a beautiful foam, a good cup of matcha cant be beat.  And don’t get me started about the soft serve matcha ice cream, I’m still thinking about it! 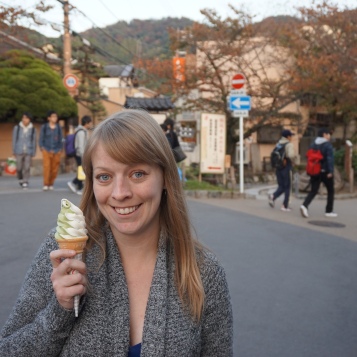 Now this list is only my favourite ten specific things that I found most interesting to try,  but my favourite meal actually didn’t tick any of these boxes. We were lucky to be able to meet up with a friend while we were there and have dinner at a restaurant she chose. At our request, she was kind enough to pick out the whole menu, a variety of dishes I would have never even thought to order. The first dish was a soft tofu, so creamy it could have pass for dessert with a little caramel sauce! A lotus root cake, pressed fish cubes, a pork omelette, battered chicken, and a rice, salmon and egg bowl. I barely read the menu, so those are my best descriptions, but pictures do it more justice!

Feast with your eyes, and if your ever in Japan, I hope you feast on some of these incredible dishes! 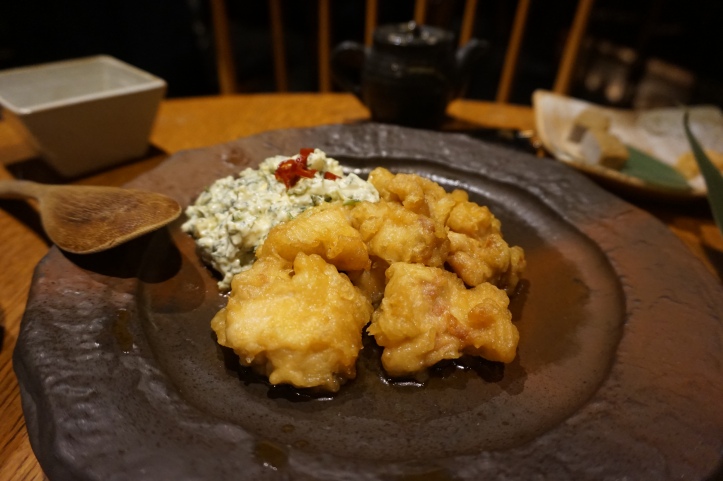